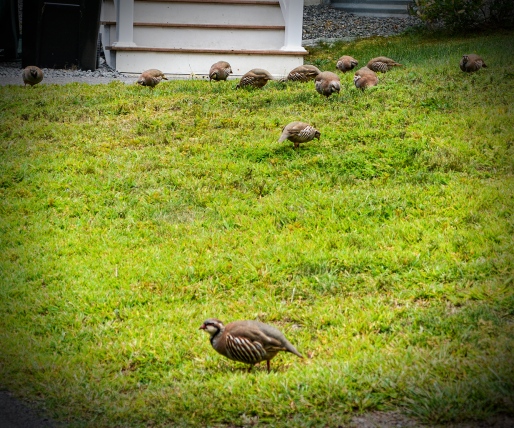 As I drove down a street a mile from the center of town, located only seven miles from Boston, MA, I noticed a clutch of twelve birds, which turned out to be some kind of partridge. The gallery of  close up photos appears below.

As far as I can tell these are either Rock Partridges or Chukar partridges, also called “chukker (chuker or chukor), Indian chuka and keklik.” According to the Cornell Lab of Ornithology All About Birds site, the Chukar partridge is a southern Eurasian bird brought over from Pakistan as a game bird. Their native territory ranges from Israel, Lebanon, Turkey, Iran, Afghanistan, Pakistan to India. They eat seeds and forage on the ground, which is what they were doing when I captured these photos. The Rock Partridge, which differs only in the neck feather’s color and look more gray in the photos I found online, are also natives of Asia and Europe.

I am pretty sure this is a clutch of Chukar partidges (Alectoris chukar), but if you could agree or disagree and tell me why in the comments, I’d appreciate it. Wikipedia claims there are fourteen different subspecies of this bird and none of them are native to the US.

What are these Chukars doing roaming around the neighborhood of a Boston suburb?

I find it very odd that this clutch of birds should suddenly appear in Massachusetts. They are not listed on the Mass Audubon site as an inhabitant of this area. The All About Birds pages claims their new US habitat is the western US, because it likes arid and rocky terrain., so who brought them to the east coast?

The male (I assume) was about 10 feet in front of the clutch and kept an eye out on the street for problems. If you look in the last two shots you’ll notice that he is fanning out his wing feathers. Even though I was across a street and in my car, the bird felt threatened and was warning me to stay away. As he seemed to get more upset the more I clicked the shutter, I decided to leave the clutch in peace and go on my way. I do not like to upset the wildlife I capture on camera.

These photos are JPEGs that I have color corrected and converted to sRGB in Adobe Photoshop CS6, but otherwise left intact from the originals.

Please click the thumbnail images below to see the large photographs.

I am a Macintosh expert, writer and photographer. I have published many articles on Apple related products, but I cut my writer's teeth producing grants and market research reports when the Web was just something a spider made. I've also worked as a photographer, dancer and social worker. ilene's Machine was born in 2000 when I realized everything I did involved some kind of machine. First, my answering machine, next a Vic 20, then a Mac 128. Add a variety of Macintosh machines and iOS devices over the years and before you know it, you have reached ilene's Machine. Please leave a message!
View all posts by ileneh →
Gallery | This entry was posted in Photo and tagged Adobe Photoshop CS6, bird photography, Boston, chuker, chukker, chukor, Indian chuka, keklik, Needham, Nikon D7100, partridge, Photoshop, red beak, red feet. Bookmark the permalink.